Uniquely Different ~ Crafted for the individual.

You can scroll the shelf using ← and → keys

HOT Sails Maui have been my sail brand of choice for a number of years now. Their full dacron Superfreak sail first drew my attention as it was so different to the offerings from other brands. I visited the HSM forum to find out more and was pleased to discover the loyal customer base HSM have and how the forum members communicate with respect unlike many other forums I’ve visited. Added to that there is regular positive input from the owner, Jeff Henderson and others at HSM. So far so good!
The arrival of my first Superfreak impressed me further as not only was it beautifully made with superb attention to detail but on the water it’s also an extremely enjoyable and relaxing sail to use so it’s no wonder it has such a loyal following. Since then I’ve added more Superfreaks some Fires and a Smack to my quiver and enjoy them all. In fact it was my confidence in the abilities of HSM designer Tom Hammerton that lead me to commit to importing his Black Project Fins designs for the UK market.

HSM really are “Built To Handle” as their tag line states and my many Gwithian rinsings have resulted in no more than 2 broken battens in as many years. However this build strength has also meant relatively high physical weights even though the on water handling has always felt light. 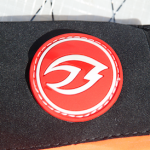 Naturally I was rather excited to hear of the new Firelight as the idea of the sweet handling I was used to combined with very light weight sounded ideal and early feedback from the first customers was also very positive. So I took the plunge and now enjoy the luxury of 4 crispy new Firelights in 4.7, 5.0, 5.3 and 5.7 (I’m sticking with a Superfreak for 4.2 weather). On unwrapping the light weight is very apparent (and they do weigh exactly as quoted, I checked) but so is the usual HSM attention to detail only now focused on weight reduction. 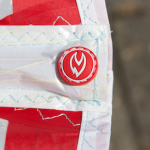 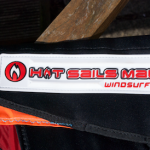 So instead of the usual HSM leather protector patches on the batten ends and mast head there are lightweight HSM protective rubber discs. The batten pockets also incorporate a kevlar fibre grid to stop them stretching and at the foot of the sail the usual mast/rail protection padding has again been lightened by the use of a moulded protector. 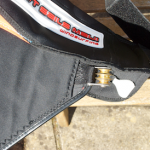 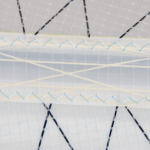 There’s no change in the trusty HSM tack pulley which features sturdy, durable, corrosion resistant bronze pulleys and certainly adds a few grams but not where it hurts.

So what’s it like in action? Super fun. So far I’ve had tricky gusty west northwesterly sessions at Marazion and Daymer bay on the 5.3 and 5.0. You immediately notice just how light and responsive it is and the direct, powerful nature but not in the “I’m going to rip your arms out and send you catapulting around the bay” style of some other grunty sails. The light weight seems to lessen the inertia and the responsiveness allows you to instantly de-power when needed, so whilst it is certainly not as gentle on you as a Superfreak it’s still very user friendly. It seems that when you combine very light weight with power, stabilty and control
something magical happens. I found myself also feeling lighter, younger, more playful and going for bigger moves when previously I’d have sailed more cautiously, and even though it was only about 7c I somehow ended up tooling about messing with clew first wave riding and helli tacks like it was a summers day.

At Daymer the wind swiftly picked up until I was well overpowered on my 5.0 much of the time, but as soon as I began seriously considering changing down the wind would ease a bit so I ended up sticking with it. In these overpowered conditions the sail did begin to feel a little overly back handed but only to a certain point and by moving my harness lines back and trimming on some more down and outhaul all became quite manageable. This is another encouraging point because the sails rig exactly to the HSM numbers and I went from the near minimum down and outhaul to close to the maximum suggestions quite happily.

What I particularly liked was the way it seemed so much easier to carry my speed through turns and yes I really do feel like they are going to help me improve my sailing. I realise I’m in that new sail honeymoon period but I just cannot wait to spend some more time learning to get the best from them and myself. 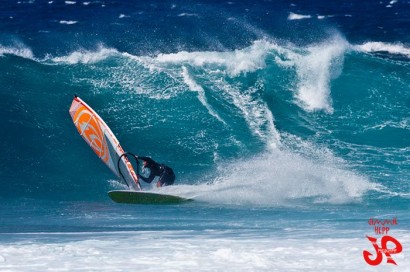